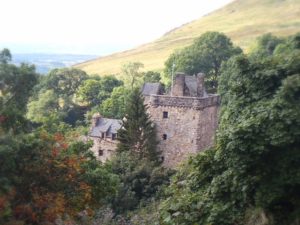 Colin Campbell, the 1st Earl of Argyll, and Lord Chancellor of Scotland, inherited it through marrying Isabelle Stewart, daughter of John Stewart, the 2nd Lord Lorne in 1465. Colin Campbell (1433 – 1493) was my 10th great grandfather.

It was named Castle Glowm but Colin Campbell had the name changed to Castle Campbell by an Act of Parliament in 1489.

They certainly lived in style. The bed chamber had an en suite latrine built inside the wall and a stone hand basin both draining outside. One bedroom had a huge vaulted ceiling. There are grotesque faces carved in the ceiling from which chandeliers once hung. 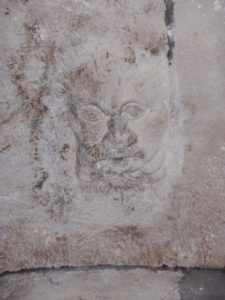 The great hall would have had a high table at one end, a gallery for minstrels and a huge fireplace.

Built on a hill, the view is spectacular, looking down over their terraced gardens and woodlands down to the village of Dollar with rolling meadows to the Forth River and then the hills beyond. 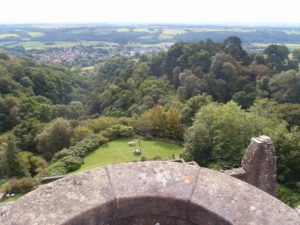 The 2nd Earl of Argyll, Gillespie Archibald Campbell (1466 – 1513), my 9th great grandfather, added on an extra hall and cellars. He later died at the battle of Floden in 1513. The castle also has a particularly nasty pit prison, which is basically a square stone hole with a trapdoor roof, for punishing offending serfs, which would not have been pleasant to spend any time in.

An inventory listing the furnishings and property includes tapestries, which would have covered the walls, curtains, tablecloths, chandeliers and pieces of armour.

The 8th Earl aquired a town house in Stirling beside Stirling Castle, previously owned by the 1st Earl of Stirling, which came to be called Argyll Lodgings, which we will visit tomorrow. The Castle was eventually burnt by Oliver Cromwell in 1654 and left to fall to ruin. It is now a Historic Scotland site under the care of the National Trust for Scotland. The current head of the Campbell clan, the 8th Duke of Argyll, now lives with wife and children in Inveraray Castle in the north.

My 8th great grandfather, Donald Campbell (d 1562), was the 4th son of the 2nd Earl, so we are not direct descendants from the later Earls nor Marquis. The 8th Earl, Archibald, was made 1st Marquis in 1641 by Charles 1, and crowned Charles II in 1651, he subsequently fell out of favour with the King who had him beheaded in Edinburgh in 1661.