The history of abortion in Aotearoa New Zealand 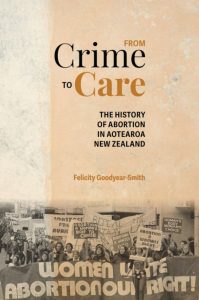 The book is now available for pre-order:

From Crime to Care presents the history of abortion in Aotearoa New Zealand from pre-colonial times to the present, weaving in stories and experiences from key people on both sides of the debate. After the first abortion clinic opened in 1974 there were protests and pickets, and the issue shaped our politics in the 1970s. Moral crusaders, activists, legislators, abortion-providers and many others put their reputations and sometimes their lives on the line to do what they thought was right.

The abortion struggle serves as an illustration of our changing political and social landscape, with a public move from conservative towards more liberal values. Finally, after 180 years, abortion in Aotearoa is a health rather than a criminal concern. However, the issue continues to divide people, and events in the United States have shown how quickly change can occur, with their Supreme Court overturning Roe v. Wade and several states banning abortions.

Felicity grew up in Campbells Bay on Auckland’s North Shore, initially a remote part of Auckland and remembers walking over the Harbour Bridge when it was opened in 1959. She went to school on the North Shore and then to medical school at the University of Auckland. She practised medicine in the Hokianga and Whangarei before going to the UK, and was a GP in a village in South Wales and then Kingston, Jamaica, before returning to New Zealand to be GP in Freemans Bay (then a very deprived part of Auckland). Felicity worked as abortion certifying consultant from 1981 to 2020.