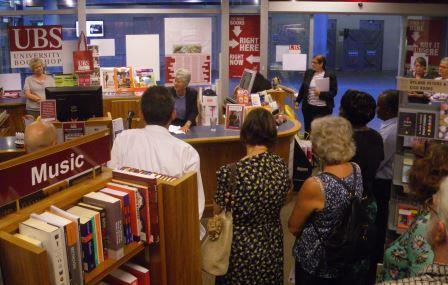 Felicity Goodyear-Smith at the book launch with publisher Rachel Scott on the left, Marie Dyhrberg QC (in striped T-shirt) who launched book on right, George and Sifiso Gwaze backs to camera right foreground.

I would like to thank everyone who helped on this case, and assisted with the book being written and published.

Firstly many thanks to my publisher, Rachel Scott, Otago University Press, both for taking on this book, and for the way you have handled the process at every stage. You and your team, including editor Gillian Tewsley, and publicity officer Rhian Gallagher, have truly been a pleasure to work with. Thanks also to Professors Mark Heneghan and Harlene Hayne, who have endorsed the book in their forward.

Justice may not have finally prevailed had it not been for barrister Jonathan Eaton and his legal team, Helen Coutts and James Rapley. The effort Jonathan put into this case was extraordinary and sustained over five long years of hearings.

Marie Dyhrberg QC spoke in praise of the book:

Forensic Scientist Dr Arie Geursen also played a pivotal role in this case, with his analyses of the DNA and other scientific evidence. Arie also made significant contributions to writing the chapters dealing with forensic testing.

The four English expert witnesses played an important role in the second trial. They painstakingly worked through volumes of material, prepared careful reports, and were all surprised that the trial proceeded despite the overwhelming evidence that Charlene died of natural causes. World HIV histopathology expert Professor Sebastian Lucas flew all the way to earthquake-damaged Christchurch, staying just outside the red zone surrounded by broken buildings. Infectious diseases paediatrician Professor Michael Sharland, paediatric intensivist Dr Simon Nadel, and home office forensic pathologist Dr Nathaniel Cary, all made late night trips to facilities where video-conferencing was available, in order to give evidence when the Court was sitting in the mornings in New Zealand.

Finally I must pay tribute to George Gwaze and his family. They coped with their five year ordeal with extraordinary dignity and courage, and a powerful faith that in the end, the truth would prevail. They endured considerable media coverage indicating that George had committed a terrible crime to which the family was complicit. The message that George was twice tried and twice acquitted did not reach everyone, and some members of the public still do not realise that Charlene died of natural causes. I hope this book goes some way to clear the Gwaze name.

Thanks again to all.